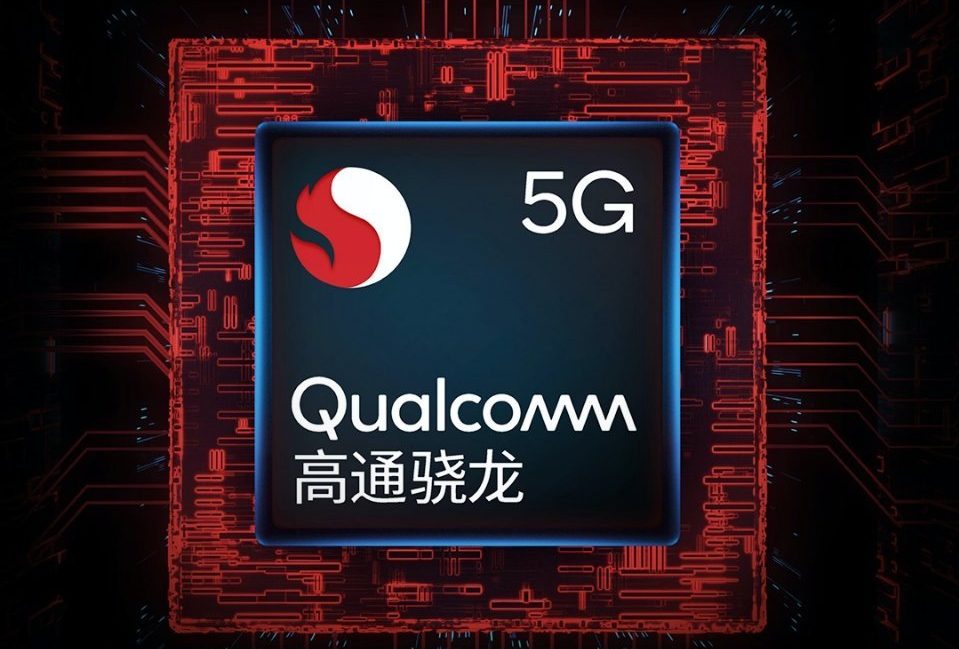 Note: This comparison is incomplete and based on rumored specs of Snapdragon 768G. We will update it once we have the official confirmation.

All three SoCs are based on the latest 7nm LPP EUV process by Samsung. It’s the same process used in Kirin 990 and Exynos 990.

All three of the SoCs have an octa-core design with a tri-cluster layout (1+1+6).

Comparing all of them, we can clearly see that the SD 768G is the winner here because of higher clock speed of the Cortex A76 cores.

All three SoCs have Adreno 620 as the GPU. However, the frequency is different for the SoCs. Snapdragon 768G SoC runs on Adreno 620 which runs at the clock speed of 750 MHz. The Snapdragon 765G and 765 runs on the same GPU but @625MHz  So, the GPU section is experiencing a performance boost of around 15%.

All of them have the latest Hexagon 696 NPU for AI tasks and operations. In terms of AI performance, the SD 765G TOPs score is 5.3. On AI-Benchmark scoring, all of the SoCs scores around 9108 points.

Moving to the scores of the AnTuTu Benchmark v8, official claims that the overall performance of the Snapdragon 768G has increased by about 10%, scoring around 360,000 points. 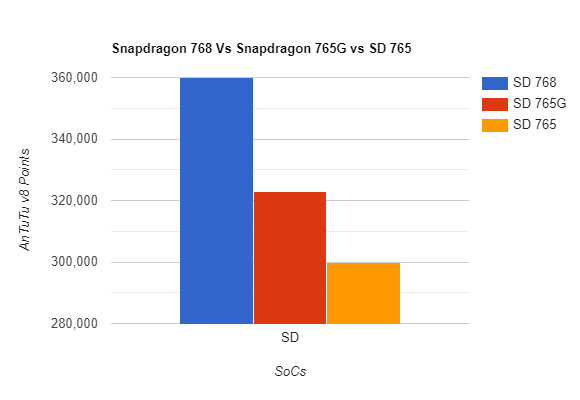 The same goes for the SD 765 and 765G which have the same network modem.

Similar to the SD 765 and 765G, it has the Snapdragon Elite Gaming feature. There’s also the aptX audio technology. In terms of camera support, we have the Spectra 355 which supports 192 MP single camera and up to  22 MP at 30fps Dual Camera with MFNR/ZSL. It also supports the latest QC 4.0+ charging.

Since Qualcomm SoCs aren’t limited to a specific manufacturer, we can see a wide price range of smartphones featuring SD 768G depending on the manufacturer. Xiaomi and Realme phones will be much cheaper, meanwhile, manufacturers like OPPO and Vivo will have phones featuring SD 768G for a much expensive price. At present, we have the Xiaomi Redmi K30 5G Speed Version rumored to feature this SoC and the price is around $300-$330. Snapdragon 765G featured in Redmi K30 5G has a price of $285 only. There are only two SD 765 phones which are priced around $400 to $600, including OPPO Find X2 Lite, and Moto Razr Fold 2. If we see overall, we have SD 765G as the cheapest SoC right now, however, if the price of SD 768G is slightly higher ($10 to $30), then SD 768G will be better in terms of price-over-performance ratio.

As the number says, Snapdragon 768G is indeed powerful not because of the GPU (since it as the same frequency as SD 765G), but because of the overclocked A76 cores in the CPU section which gives it a boost of 10% which is visible in AnTuTu. However, all other aspects are the same including AI, Connectivity, Camera, and other features. If you were to select a phone among these SoCs, the price will be the main factor here. If the Snapdragon 768G phone is priced slightly higher ($10 to $30 than SD 765G) then it will be good to select an SD 768G phone. If not, then staying to a Snapdragon 765G will be a way better choice. Snapdragon 765 phones aren’t that much, so it doesn’t even matter.

We hoped that you loved our Snapdragon 768G Vs Snapdragon 765G vs SD 765 SoC comparison. Don’t forget to rate the post.